The London Toy Soldier show is fast approaching and the 54mm snow scene is taking shape about as quickly as I had expected.
The display is a 4ft x 2ft diorama for Clive at grey Goose who is the European distributor for Figarti. The layout is designed to display their new winter vehicles- Tiger tanks and artillery and limber I think- Clive has the details I am sure.
If you read my November plans post then you will have seen the plan but just as a reminder here it is again- 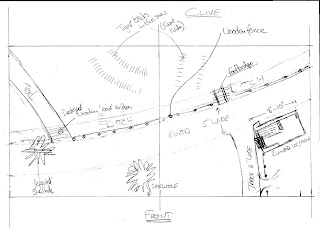 I think the idea is to have the limbered artillery along the road and the tanks in the fields behind. The whole scene is to be snowy and wintry. I want to make the fields covered with fresh untouched snow except for the tracks of the tanks whereas the road will be churned up full of ice, snow and mud.
I began a couple of weeks ago with the base boards, cutting the ditch out of the polystyrene and adding a couple of small bumps in the fields that will look something like soft dunes when finished.
You can see from the plan that there is a ruined wooden house in the bottom right corner. I wanted it to have a stone chimney that stood up while all around was destruction so I started making that with a frame of foam board covered in Das Pronto clay and then carved to look like stone. 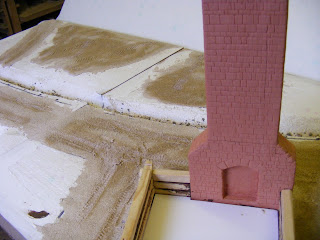 As soon as that was done I stuck it to the board for no better reason than I wanted to see it in place. I then added logs that I had roughly squared up. I ended up being a bit short of space so had to use the chimney as a house corner as you can see in the photo.Over the next couple of days I added the texture to the road by coating it with grout mixed with some builders caulk (I buy it is tubes from B and Q and I use it for all sorts of things- a very useful general purpose bit of kit). I then ran a plastic wheel along the road which left lots of tracks in it- a good base for a snowy, muddy road.
The rest of the board was covered in grout and the ditch had lots of rubbish thrown in it to give it texture. Once it was dry I could start painting and adding the wood work for the fences and bridges

Although I was going to cover the whole thing in snow I still set about painting and finishing it as if I was going to leave it without snow. The only extra things I do is to highlight with a white dry brush over everything to help give the feeling of cold and frost as well as in places over exaggerate the texture so I can have stuff coming up through the snow. This sort of thing really works with the snow effect.
The paint job was just basic browns, washes and high lights. Once all that was dry I added the vegetation, again planning for it to show through the snow so using long grass and highly textured ground work.
The final effect, all ready for the snow storm has turned out OK- 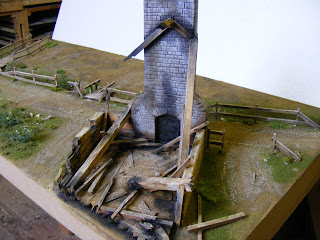 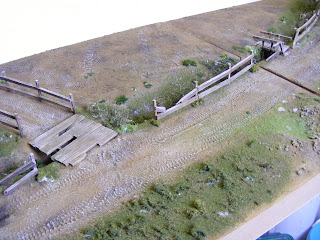 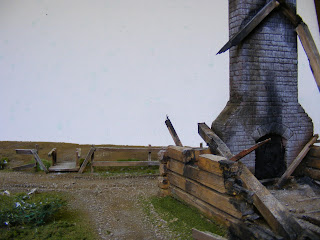 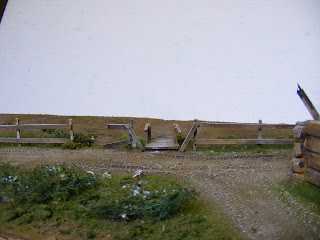 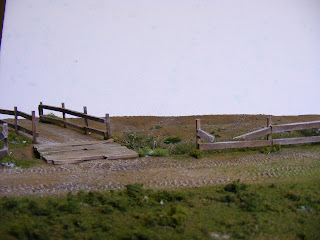 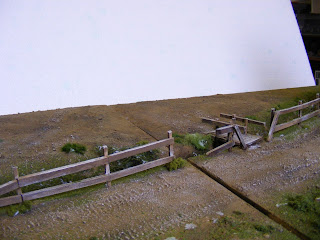 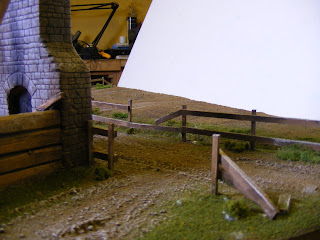 You can see that I have added lots of wood in the ruined house as well as finishing off the fences. The vegetation is concentrated in front of the road and around the fencing with nothing on the roads, as they will all be mud, and the fields behind the roads as they want to be beautiful untouched snowy fields so having grass underneath would be a waste of flock.
You may also notice the heavy white dry brush on the fencing and roads. This doesn't look quite right in these photos but once the snow is on then it will just help the whole wintry effect.
There is just one week to go so the snow will go on on Monday and Tuesday leaving the rest of the week for it to dry. It needs that length of time because I really soak it with PVA glue to make sure it stays and I also mix some of the snow powder with PVA to make a thick white paste to put onto flat surfaces and I can make it droop over the side. I really like the effect it gives.
I am going to try a new product to me and that is the Deluxe shoveled snow that they say you can pile up and squash detail into it and it the detail stays (such as tank tracks) and I hope to be able to pile it up like cleared snow. We will see how it goes. Also, there is a shell hole in the road and I want to try to put a watery puddle in it with smashed ice around it. It should look good if it comes off.....
Anyway, that is it for this one. I will post more photos of the finished job and then photos of it on display at the show.
Talking about the show, if you are in London on the 3rd December then come along. It is a good day out if you are into your model soldiers. Details can be found here:
www.thetoysoldiershow.com
I am sure I met a lardie last December (it was you wasn't it Thomas?)