The week has been pretty productive for the first Normandy base. The first 24x12" base is just about populated with carcasses and they all seem to fit together OK.The first building I added (that I mentioned in the earlier post) was based on a Normandy building that the US Airborne fought over.
I liked the small extension on the side as well as the small pillar in the small alcove. I think it is a water pump. 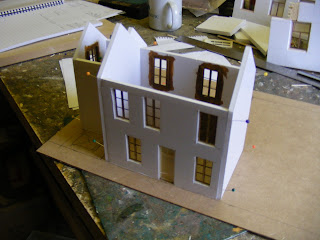 You can see how I decided on the layout from the original photo. I wanted to add the double doors to the left of the small extension but it might be a bit tight so will have to wait and see.
The second structure was in the opposite corner from the first and was based on the following photo. 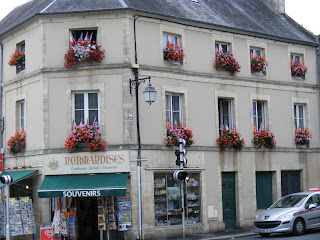 I tall 3 story building with an interesting corner. It fits beautifully into this first base- 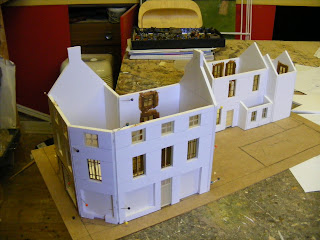 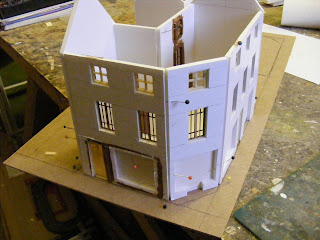 I have put different window frames in but otherwise I have matched it pretty well. I had now got two larger buildings built so it was now a case of fitting things around them and I photo I saw of another building was just right to add to the left of this corner building. 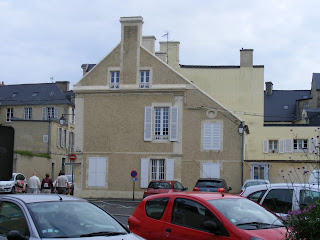 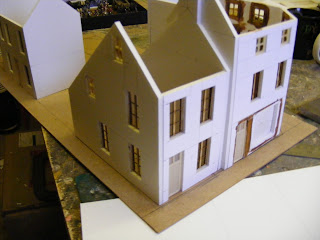 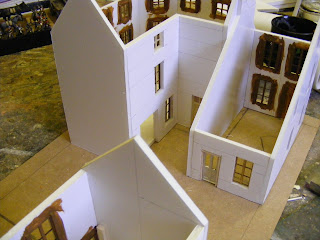 I am using laser cut windows and the door comes from my stock of home made resin doors. The two buildings together now make a very cosy back yard and I am starting to see the effect that I wanted with a tightly packed set of houses.
The final building has not been inspired by one photo really although the detail I am planning comes from this one- 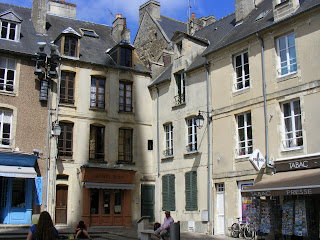 I like the dormer windows and the shop front detail so I will be incorporating most of that into this next building. 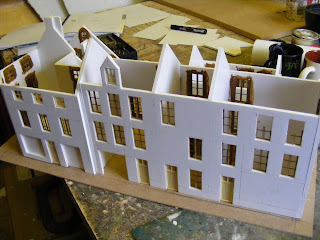 You can't see the similarity between the photo of the real buildings and the model yet but by the end of the process some of the details will be.
I was now in a position to see if I could fit the double doors I mentioned on the first building as this last one backs onto it. You can see from this that it was impossible so it became a tight walkway into the courtyard in the middle of the base.
You can see there is not alot of room in the middle for the court yard so the only gap that is left will probably be filled with a gateway and maybe a small lean to shed or outhouse. If I added another house in the gap then the courtyard becomes unusable as a space.
The photo shows the space that is left and it makes sense to just add a wall and a gate. There will be 3 vehicle sized entrances to the courtyard and one walkway as well as numerous back doors so i think there will be lots of opportunities for mischief in any games this is involved in.
The next stage will see the buildings starting to be clad in whatever finish I decide such as stone.