Sorry for the long silence but I have been so busy with work that I have had to put the blog on the back burner for a while. It does mean I do have some new projects to post about over the next few weeks.

Anyway, down to business again. Last autumn I was commissioned by a customer to build an ancient hill fort based on the forts found in the UK such as a remains of a fort in Yarbury in Wiltshire
The fort was to cover a 4ft x2ft area and I was supplied with a very good sketch of just what was wanted. 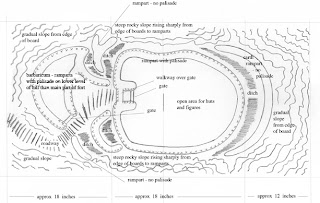 You can see that there is a hill and a fort to fit in so the first challenge was to get all that to fit the space I had. I had to sketch out what I wanted on the boards and play around with it until I was happy with what I had. 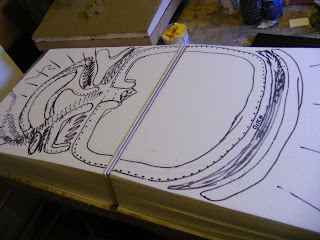 Once I knew where everything was going I built up the hill with polystyrene and once the glue was dry carved it into shape. I use polystyrene as a base I will cover it in grout which dries very hard protecting the polystyrene. It means I don't have to buy the tougher but much more expensive high density blue foam. 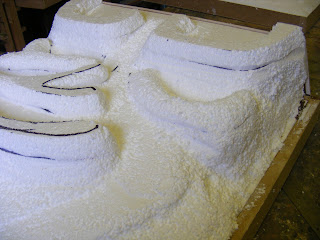 The sides of the hill are vertical so I add plaster casts of rocks to create a cliff face. 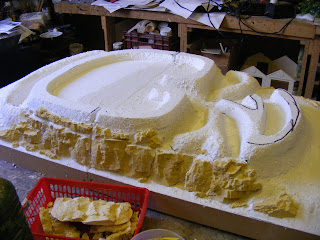 The cliffs are about 6 inches high to give you an idea of the size.
At this stage, the fort has really taken shape but is just bare bones of a structure. I now added the wooden Palisades on top of the banks of earth. I bought long lengths of 6mm dowel and cut them to length and then cut them in half and added a point to one end. I like to cut them in half so you loose the smooth edges of the dowel.
I cut a ledge on the outside of the earth banks, added grout onto the ledge and then placed the dowel pieces onto the ledge. This gave them support and made their height regular though out the fort. I left them for 12 hours and then filled in the gaps around the dowels and then covered the whole board in grout and let the whole thing dry for at least 24 hours. 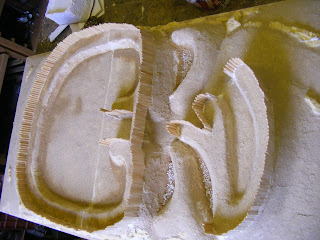 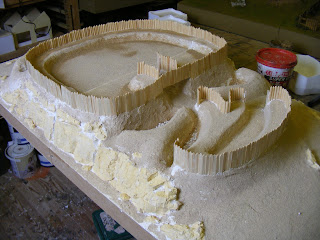 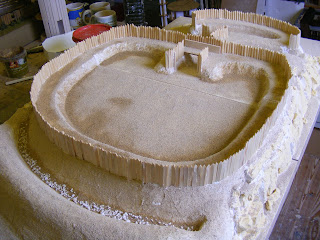 You can see I also added a bit of cat litter at the bottom of the ditches just to give some different texture than the rest of the landscape.
That is the modelling just about complete so down to painting. The earth was done with a brown emulsion washed in raw umber and then dry brushed. The wood was painted with a watered down raw umber and then dry brushed with the same cream highlight as the ground. The cliffs were painted with a dark grey and then again washed in raw umber and dry brushed in a series of lighter coats of grey until the final touches with white.

The final stages are approaching so I now add the flock which is a base of Woodland Scenics Weed turf, followed by their green turf with a final highlight of Nochs spring grass. I soak the whole thing in watered down PVA glue to make sure it wont rub off- a messy job but very important.
Once that is dry the last touches are to add a few bushes amongst the rocks and that is it. 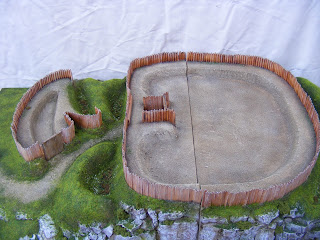 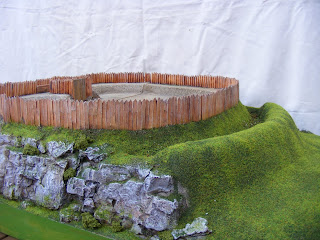 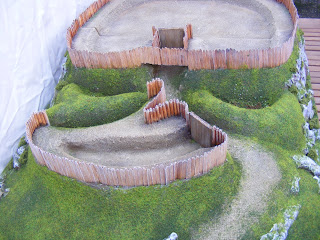 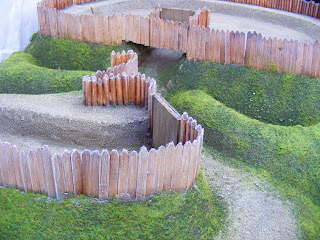 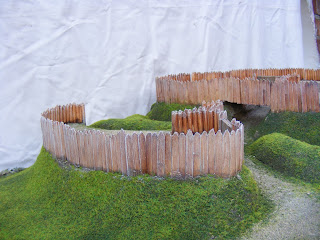 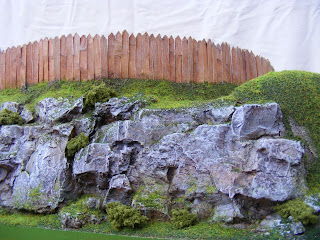 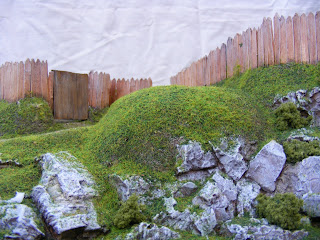 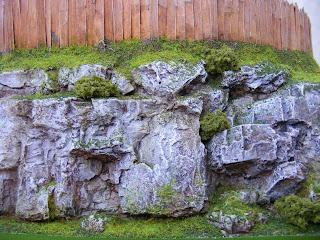 I was very pleased with the result and I found it fun doing something I hadn't done before. I think it would make an interesting game trying to take the fort.