The next three buildings in the project are not on the same scale as the church but were just as interesting to make.
The Arnhem museum model is the third time I have made it (but the first time in 15mm) and the only source I have worked from is of the original model by Colin Rumford of Rapid Fire. The main block is hexagonal and two stories high and there are two wings coming of that to make a very odd shaped structure.
Once I had the hexagon shape worked out, using some school boy geometry everything else came together pretty easily. 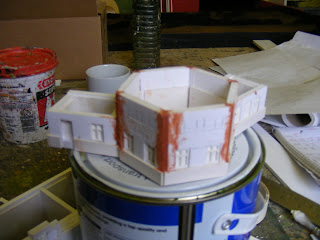 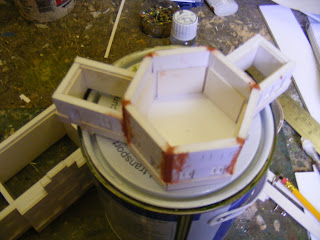 The structure was made from the usual foam board and the windows were more laser cut windows specially for this project. They are simple casement windows suitable for lots of uses so I fully expect to use the design again in the future.The museum was to be stuccoed (is that a word?) or covered in a plaster coating so I like to add a bit of depth to the walls so I stick on mounting card around the walls. I think this makes a big difference to the look of the finished building. A flat wall is not very eye catching but adding depth and 'contours' to a wall adds interest and gives you opportunities to add extra painting detail.
When everything is dry I then cover it is Quick Drying Pollyfilla (Spacal or something like that in the USA). This gives you time to work with it before it goes off but soon stiffens enough for you to be able to smooth it off or add a bit of texture.

Although it say Quick drying I do tend to leave it for half a day at least before I paint it. In this case, white. I then cover it in a wash of raw umber and then dry brush it again with white before finally adding water marks and other weathering. 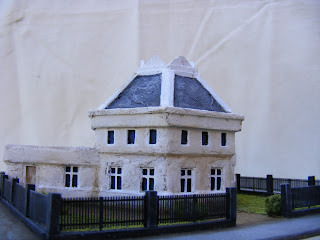 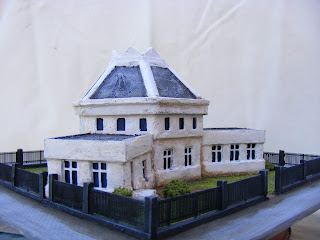 The next building was made just like the museum but is a fictitious building. It was to be on the large side for a house and similar to a photo I was given of a model my customer liked so here it is finished.. 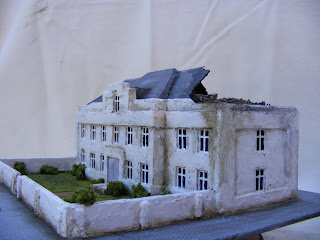 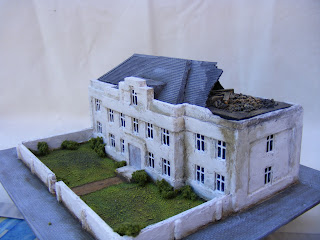 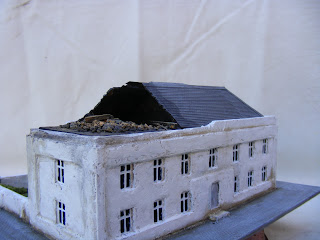 The final building was a representation of St Elizabeth's hospital that was in Arnhem.

This was again the third time I had built this piece but the first in 15mm. The most challenging part of the build was the roof. 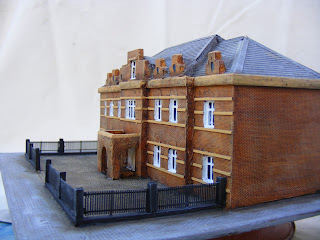 There are two levels to it with dormers to the front and the customers needed to get in the building so the roof had to come off. The dormer windows are attached to the front wall so I didn't want to make a join there so I designed it for just the back half of the roof to come off. I find this works well with buildings that have complicated roof lines. Gaps and spaces in the roofs very quickly spoil the look of a model so you want to minimise these when you can. It isn't a problem on a straight forward roof as the whole thing can come off but when you have dormers, corners or different heights then I think it is best to consider the half roof option.
The hospital is brick built so once I had the foam board frame and the windows cut out all I needed to do was cover it in brick embossed plasticard. There is some decorative brick work on the front of the house so I was able to just paint a lighter line of bricks on the plasticard and add a small half moon of bricks above each window. Mentioning the windows, again they are the same design as used in the museum and large house above.


There are now 4 buildings complete and just one to go. I am making this now so should be able to post the final episode in this project withing the next week or two.
Posted by David at 15:17