I have just shipped my latest 54mm project- a 54mm (approx 1/30th) representation of the front of the Reich Chancellery building sometime during the 1930's.
I was contacted by a customer who wanted a large- wide and high, model of the Reich Chancellery. It was to be a backdrop for a display of figures so only needed to be a few inches deep. The customer had a road way already in place so all I needed to do in front of the building was to add a pavement.
I was sent some photos and digital representations of the building to base my plan on: 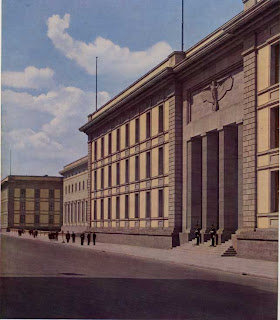 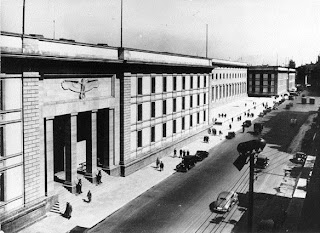 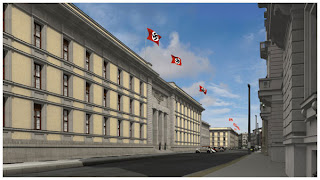 The bottom picture shows just how big the model needed to be- the guards look tiny! The above information along with a few emails backwards and forwards finally turned into a sketch. I am very flexible at this stage so I hardly ever do a proper drawing that I work from. This sketch gave me enough information to get going with it:
The dimensions on the drawing show the finished model as 120cm long and 60 to 70 cm high- the height did end up around that but the length finished at 140cm so you can tell how things change during the build.
All the pictures I worked from showed a wonderful eagle above the door. I very quickly decided that this was the eye catching piece of the model and I needed to track down something special. I contacted a few companies that sold the German figures along with military suppliers but nothing was right (I needed a wing span of 26cm so I was being quite fussy!). Over the last few months I have been getting more and more laser cutting done so I went to my supplier to see what he could come up with. He did an amazing job on it and I knew then it was going to be a special model.
The model was going to consist of 24 identical windows along with 4 imposing pillars at the entrance so I arranged to get these laser cut and they were perfect when they came back to me.
Once I had the windows I could start the process properly as I nearly always use the windows to scale up the rest of the building so until I have a window I find it tricky to start the build.
I quickly realised that a model nearly a metre and a half long was going to be very difficult to work on so I decided to split it into three- the entrance and the two wings.
This worked very well and was able to get alot of the work done on each section before I joined them all together. This joining was a bigger challenge. The joins had to be sturdy and well supported and then made to disappear. I think, after a long time working it all out they came together well.
The entrance is the centre piece, not just because it is in the middle but because of the eagle, the pillars and the stone work. 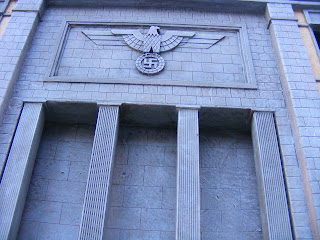 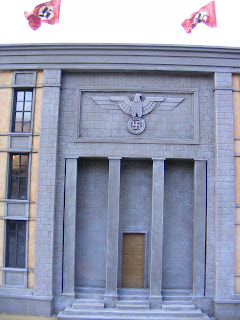 The stone work was done in my usual way of carving blocks into the air dried clay. I had made the basic frame from foam board so I had to brace it well to stop it warping after I added the clay. The eagle was put in a small recess to give it even more presence and then the pillars,over 30cm long, were added right at the end. The steps needed a bit of thinking about as I needed to leave a flat area for the guards in front of each pillar and have them growing at the sides so not the normal stairs.
I was pleased with how it turned out.
The two wings were identical. I used foam board for the main structure. The cornice and trim is balsa wood added in a series of layers to achieve the pattern. 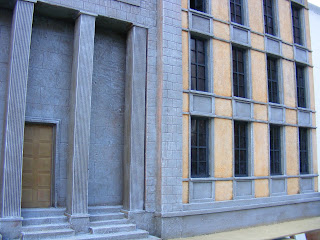 I then coated both wings with a couple of coats of finely textured paint to cover up the grain in the balsa and to make it all look like stone. Once that was dry it was onto painting.
I painted everything that was grey a deep grey and the lighter areas yellow ochre. The whole building was then washed in a raw umber wash. At this stage it looked horrible. I could then start to dry brush so the grey areas got about 3 layers of progressively lighter grey with a final light brushing of white. The yellow ochre areas got some Vallegio dark Flesh followed by Iraq sand highlight. Finally the black window frames had a highlight of black grey and that was about it.
The very last thing to do was to add 4 flags on the top of the building. I got these from the Flag Dude in the USA. I have added a link to his site. If you need a flag then he is your man.
Here is the finished item: 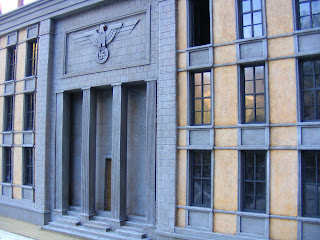 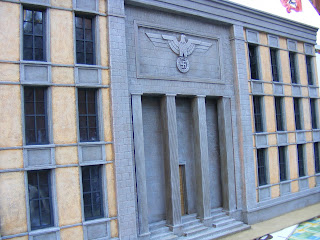 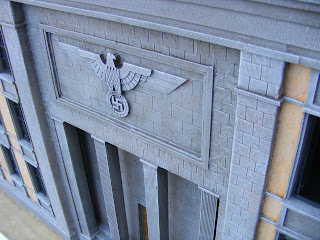 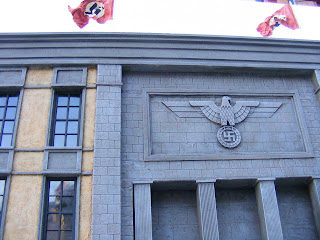 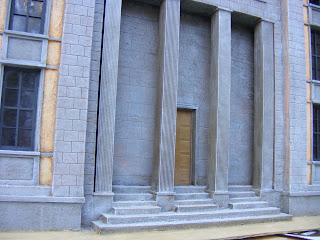 This was a very interesting project to do. I haven't been involved in making many buildings this modern. It was the first building I have made with serious amounts of laser cutting involved and I think it made all the difference. If the eagle hadn't turned out as well as it did then the whole thing wouldn't  have looked as good. I used to make all my windows from resin but I think I will be moving away from that to the laser cutting- they are cut perfectly and once I have the design in the computer it can be scaled up to any size. This is important to me as I am doing work from 15mm to 54mm.

Email ThisBlogThis!Share to TwitterShare to FacebookShare to Pinterest
Labels: one off buildings