One week into the project and things have moved on. I started on the buildings straight away as they will probably be the most time consuming things to make, other than the two bridges. Also, once the buildings are made I know exactly what space to leave them on the board.
The first post showed you the three buildings I had chosen to copy and all three models are just about recognisable as those structures.
Cafe Gondaree is nearly complete except for the roof and painting it. This is the third or forth time I have made this cafe and I have lost count how many times I have painted the 20mm resin version from Ravensthorpe miniatures but I think this latest version is the one I am most happy with. 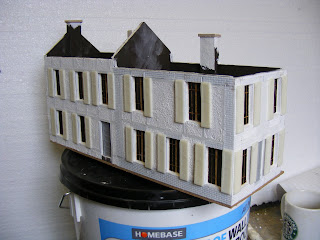 I have had the windows laser cut to match the real things, I have some good looking louvred shutters and I think I have got the proportions of the model just about right. I also took time getting the brick patterns as close as I could to the original. It is great what you can do with imaginative cutting of brick plasticard.
The detail doesn't show up too well on the photo as I haven't started painting but it is recognisable as the cafe.The model is about 10" long.

The smaller, more decorative structure was great fun to make. I again had to use some imaginative cutting of the brick plasticard as there is quite alot of decorative brickwork on this house. It also has an interesting little protruding room at the side which makes it a bit different. This is now complete except painting and the roof. 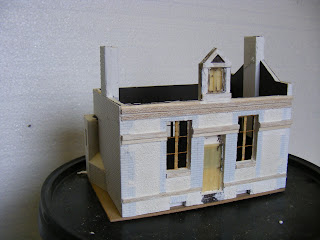 I have used laser cut windows again, but in a different style to the cafe.I think this one will look pretty good when it is finished.
The third building, the town hall, I think, still needs some work doing to it. I am in the middle of rendering it's walls but once that is done it will just need painting and the roof adding. 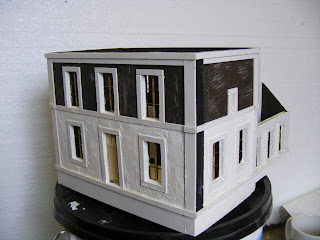 This is the largest building of the three but probably the least interesting. I think it's size will be the eye catching feature of this one. I think it will be a key building in the game.
The boards have also been started but not by much. The wooden carcasses have arrived and I have filled them with polystyrene. They are stacked and drying for a few days ready to be worked on. This picture shows just where they are in the process but it really isn't the most inspiring piece of photography I have ever done! 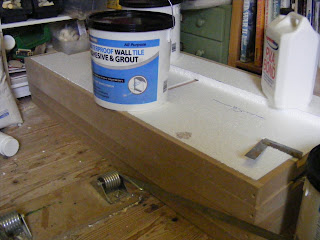 That is week one complete and I am just about where I wanted to be. Next week will see the bridges complete (just about), the boards sculpted into shape with maybe the beginnings of some texture on them. The buildings won't have moved on much as they are ahead of the game. I don't expect to have had any paint brush touching the job until the week after. So far so good I think.