Sorry for the delay in posting the final part in the show run of posts. A stomach bug, getting children back from university for the summer and generally being knackered from the show has slowed me down for a few days.

Anyway, after the previous posts about the preparation for the show this last show post is about the show itself.
We arrive at the hotel venue about 1pm on Friday afternoon which gives us a wonderful 4 or 5 hours of playing with toy soldiers! Once we have unpacked the van and sorted stuff out we just have to display enough soldiers to cover the 30 feet of display space we have. A couple of friends meet us there so all four of us have a great time. My biggest worry was that I hadn't brought all the terrain and dio boards but it was fine and by 6 in the evening the display was just about there. 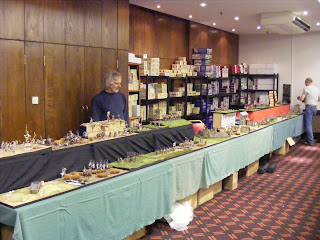 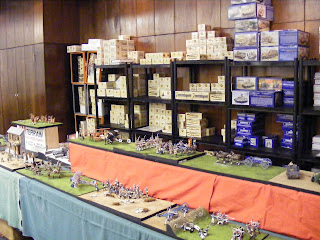 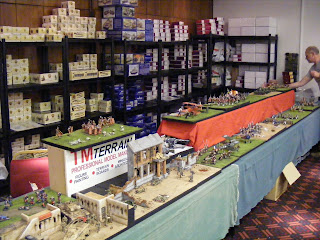 The dios themselves looked good and by the end of the show about a third had been sold. All the dioramas are on sale during the show and as usual I sold about a third of them. I make them all 60cm x 30cm now for the show so they can easily be taken home by customers.
The abode building dio was finished in plenty of time and was really worth the effort as it looked great filled with Africa Korp figures. I think the dio was sold by lunchtime so I think another one will be done for the next show in December. 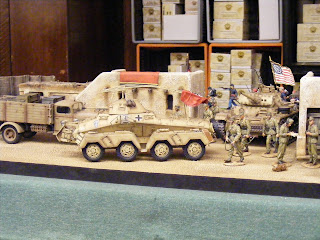 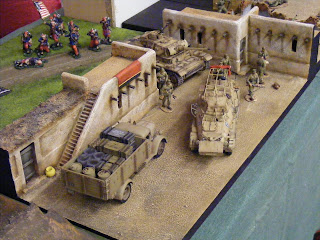 The last minute details and weathering on the buildings made all the difference. The blanket hanging over one of the roofs added a splash of colour and the staining around the wood roof beams made the whole scene look used and fitted the atmosphere that First Legion figures help create.
The Stalingrad scene came alive with figures on it but I wish we had a German Stug or PZIII model we could have added but we had sold out of them. The Russian AT gun was ready for whatever was coming round the corner. 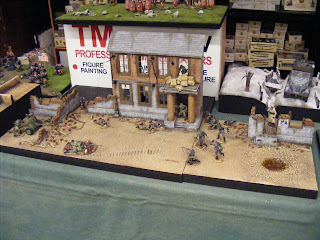 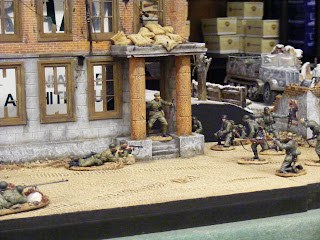 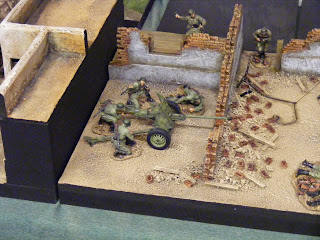 The other dios showed off the figure displays beautifully. Here are just a few photographed with the new releases on them.

The show itself was the usual good day meeting lots of regular faces as well as some new ones. It was great to meet a couple of wargamers (I hadn't expected to talk to a customer about  the Two Fat Lardies rules sets but there I was was discussing how good Sharpe's Practice is!) that had come to the show for the first time. It would be great to see this continue as the two hobbies have alot of common ground.  Two or three customers took the opportunity to have a chat with me and place diorama making commissions with me as well. The best sellers for us on the day was probably the new John Jenkins armoured car and the First Legion Romans and Crusaders.
Finally, I would like to take this opportunity to thank the organisers of the show. Mike and the rest of them at King and Country have done a great job with the show over the last 7 years and they have announced that this June was to be their last show as organisers. They made us very welcome when we started coming to the show and they have continued to support us and make our show experience a good one ever since. They have passed it on the Guideline Publications, the publishers of Toy Soldier Collector magazine, in a very healthy state. Roll on the December Show- the first weekend in the month.
Posted by David at 14:06