I have recently made some 20mm fortifications for the Normandy landings. It has been one of a series
I have completed for my customer and it has been a mix of scratch building and incorporating off the shelf pieces into the bases.
One of the interesting parts of this commission was that I came across two companies I hadn't heard of before.-
accurate armour
PN Sud Modelisme
both companies make some terrific Atlantic wall fortifications. Both companies have a good selection of bunkers and accessories so if you are doing 1944 Normandy in 20mm go and check them out. 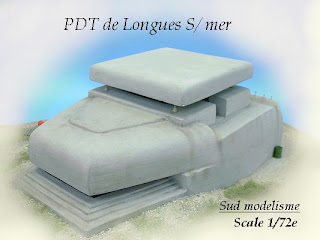 This is what I ended up doing:
I had great fun making these. I had been to the Normandy beaches the previous summer so had seen some of the originals so it made the project even better.
I like the concrete effect I get with painting- it is just starting off with a dark grey and slowly adding more white to it as I dry brush each bunker. The final highlight is straight white which just brings the model to life. The final touch is a bit of weathering with raw umber to give the impression of water marks and rust. I was pleased with the result. The originals from both Accurate and Sud Modelisme both painted up well- Accurate needed washing and undercoating as they are some sort of resin where as Sud Modelisme are made from plaster so take paint straight away.
The final set of photos are from the customer and show them in action. You will also see some landing craft from Ravensthorpe Miniatures- I painted those as well. Another interesting project and was a bit different than normal.
The game they had must have been an amazing experience looking at the photos. I don't know the size of the table but it must have been a whopper!
I thought  I would finish off with one shot of another Normandy commission- this was a 15mm scale job and was a recreation of part of Omaha beach and the table was 8ft x 6ft. The landscaping is all my work (I thought  I got the sea looking good) but the buildings are the pre painted Landmark range (available from Timecast now)and the bunkers are the Flames of War bunker sets. I might do a more detailed look at this job at a later date:
Posted by David at 09:24