You will have seen shots of the English Civil War game a customer had at Salute. The game made quite an impression on the guys at Warlord Games and Wargames Illustrated and they invited everyone up to Nottingham for a photo shoot to go in the magazine and a future edition of their rules. Sunday was the day and a good day was had by all.

I won't go into too much detail as I will leave that to our hosts but we all arrived in Nottingham about 10am with the game finishing about 7pm in the evening.
It was the first chance I had had of playing the game and we were able to play to a conclusion in the day even allowing for regular stops for photos and notes to be taken ready for the write up. It was great to be able to move wonderfully painted figures over a good looking table in a purpose built wargames room.
It was also great to watch Dan, the WI editor 'work' the table with his camera and lighting equipment. I didn't realise you needed to be fit to do his job- I have never seen a wargamer move so fast to get his lighting rig up before the camera shutter went!
The sharp eyed of you may have noticed the church- the new tower from Grand Manner had been bought at Partizan and I had managed to get it painted and attached to the church so now it looks like a proper English church. It also adds considerable height to the table which is always a good thing. The urge to put a sniper in the bell tower was over whelming.

Here are a few more shots of the game in progress. These are all from early on in the game as I don't want to give anything away for the full battle report published by Warlord later on this year. 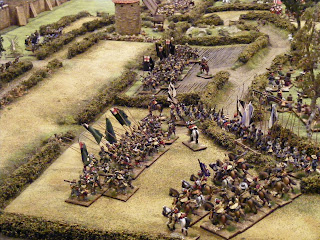 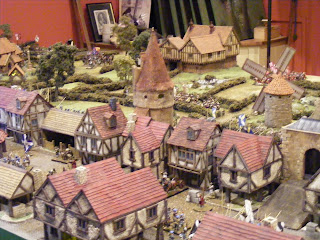 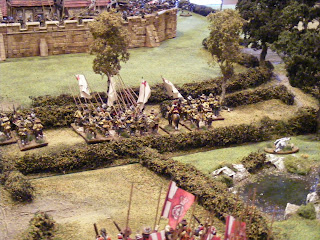 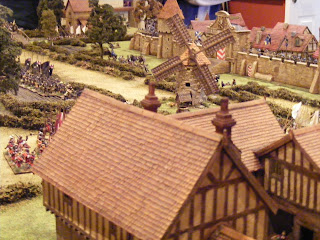 Keep an eye out for a full report and some really good photos in a future edition of Wargames Illustrated and a detailed battle report from Warlord games in their new Pike and Shot rules. I can't wait to see them.
Posted by David at 13:01