I have been working on the mountain base project over the last few weeks but expect to accelerate with it now until it is finished. I mentioned it in my November summary but since then we have amended the design a little. The layout is still 4 ftx 4ft but we have created a better feel of an enclosed and protected base. The final drawing is now 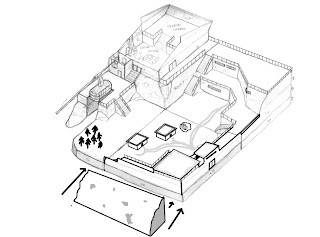 The new bit is drawn in the darker pen.
The first piece of the project that was finished was the cable car-
This was made from laser cutting the panels and building it as a kit. I just need to weather it and add some snow but that is for later. I thought I would use this car to size up everything else but in fact when I came to start I began work in the opposite corner and the redesigned area.
The structures are going to be a series of concrete bunkers and buildings. The winter base from the film Inception helped with the look of the place. 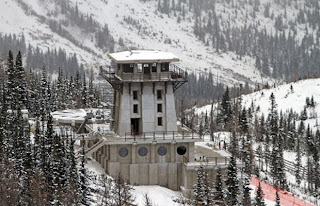 It took me ages working out the shape, size and other design issues- even with such a good drawing. In the end I built up the edges of the boards and then built in from that.

Throughout the build I am using 5mm thick foam board. It is light, easy to cut and strong as long as you brace it well. I use PVA glue to stick it together and then pin the joins for a couple of hours at least.
I now had the basic shape sorted out and all I had to do was build on it and add a bit of details. 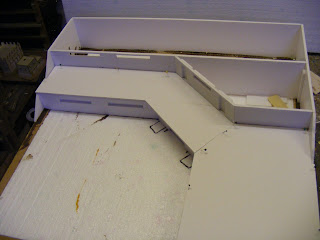 You can see how I build up the levels. Each one is about 5cm tall.
Once I had made the basic structures I added some bastions to give it some variety along with adding card on the flat wall surfaces to give it some interest and some ledges for the snow to rest on.

This half is now pretty much ready to have the texture added to make it look like concrete but I won't do that until the other half is completed to the same stage. I can then texture it all in one go and hopefully will keep the effect consistent throughout the layout.
Thats it for now. The next post should be the other half of the table up to this stage.
Posted by David at 13:35